Today, a lot of people all over the world are changing their diets and choose to stop eating meat and other animal products. All these people make different choices: some keep on eating eggs and dairy, while others decide to rule animal products out of their diet completely. So what is the difference between vegan and vegetarian diets? It is essential to understand this difference, especially in case you want to become a vegan or vegetarian. Read on to understand which kind of diet suits you better.

The definition of veganism is the practice of avoiding all kinds of animal products in one’s diet and lifestyle that involves the rejection of the treatment of animals as commodity to humans. In simpler words, vegans do not buy and do not consume any products that come from animals.
The term veganism was coined by Donald Watson back in 1944. At first, the term only described a vegetarian who does not consume dairy. However, now it has a much broader meaning. It is defined by the Vegan Society as the principle that humans should never exploit animals. In the 2010s, when veganism became so popular, a lot of people began building their new lifestyle according to this principle.
Most people decide to become vegans for ethical reasons. According to a speech pronounced at the Vegetarian World Forum, the compassion and its healing power lie at the heart of this ideology. When one takes care of animals that have been used and abused for years, they express the highest form of love. Vegans never expect anything in return for their lifestyle. After all, there is no way animals can pay them back.

Vegetarianism has a slightly different meaning. It is defined as the practice of avoiding consuming meat, as well as certain by-products of killed animals. In other words, vegetarians do not buy or eat any products that are directly related to killing animals. For example, except for meat, they avoid consuming the products that contain gelatin, because it is produced by boiling ligaments, tendons, or skin of pigs or cows.
In 1839, the term vegetarian was utilized for the first time. Back then, it was understood as a “vegetable diet”. However, even before that time, there were people who abstained from eating animal flesh. The earliest data about vegetarians were found in the 7th century BC, and it is a known fact that a lot of famous people of that time, including the Greek philosopher Pythagoras, were vegetarian. 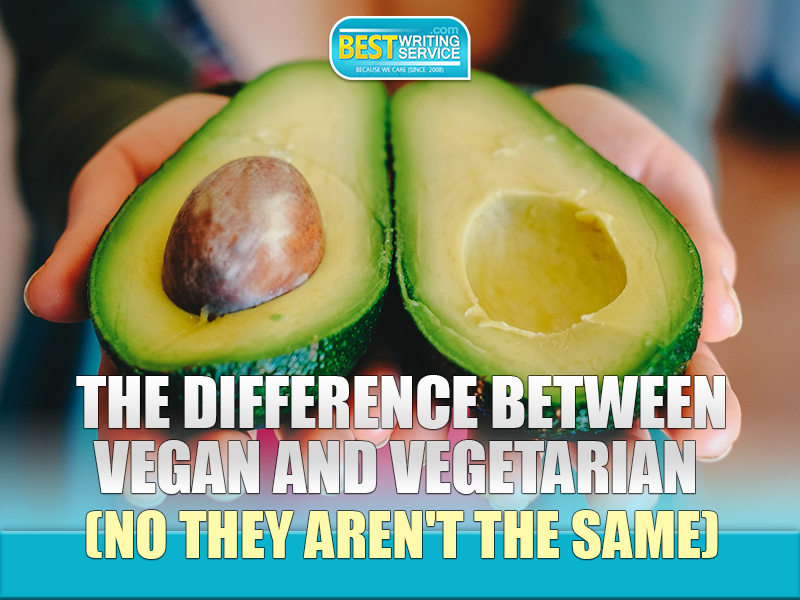 The Difference Between Vegan and Vegetarian Diets

So what is the difference between vegan and vegetarian diets?
The difference is simple: veganism is a more complex approach to vegetarianism. Most vegans start as vegetarians and eliminate different animal products from their diets gradually. Minimizing the consumption of eggs, dairy, and other products, they eventually get to the level of veganism.
There are lots of reasons for one to become vegetarian or vegan. It can be done for health reasons or for ethical reasons. Some people do not think about any of them, just preferring to eat more plants than animal products. At the same time, veganism is more often about a person’s ideology than vegetarianism. If one completely avoids animal exploitation, they have to make a lot of changes to their lifestyle. It cannot be done merely out of preferences – it is a conscious choice.
Another difference between veganism and vegetarianism is the level of commitment to the cessation of animal exploitation. If vegetarians avoid only the products of direct animal slaughter, vegans strive to reduce any pain inflicted on animals. For example, if one eats an egg, they do not harm the hen directly. But, on the other hand, animal industry exploits hens to get eggs from them, which is not right.
Some vegans say that vegetarianism is not enough to end animal suffering and call everyone to become vegans. However, in this vegan vs. vegetarian debate, there is an important point. One always needs something to start with, isn’t it right?

How to Become a Vegetarian Step-by-Step

If you want animals to stop suffering but do not know how to begin, here’s a guide ‘how to become a vegetarian for dummies’. Keep in mind that you have to start with getting knowledge about vegetarianism and begin slowly. Whenever you feel that you are ready, eliminate animal products from your diet.
You can even do it by eliminating one animal at a time. For example, first, stop eating beef for a month, then remove pork from your diet for another month, then chicken, fish, seafood, and so on. After some time, you will see that you have stopped eating all living beings and it wasn’t that hard. Just be sustainable and remember why you are doing it.
Of course, you are going to encounter a lot of questions from your family and friends about your new diet. Be ready to answer them calmly and efficiently. Best of all – lead them with your own example!

How to Become a Vegan Step-by-Step

If in the vegan vs. vegetarian debate you want to take the vegan side, you should also do it slowly. So, how to become vegan step by step?
Actually, it is very simple. You should just do the same thing as you did while becoming vegetarian. Just keep on eliminating animal products from your diet. Stop eating eggs, then cheese, then milk, and so on. Slowly but surely, if you are consistent, you will become vegan without overwhelming yourself.
When you get there, you’ll understand that it wasn’t that hard!

Veganism is a harder approach than vegetarianism and requires more commitment. While vegetarians aim to reduce the direct violence suffered by animals, vegans want to eliminate animal violence altogether. It is not only an eating habit; it is about being compassionate to everyone.
Now, when you understand what veganism and vegetarianism are, if anyone asks you, ‘what is the difference between vegan and vegetarian diets?’ you know what to tell.

Some text in the modal.

Some text in the modal.